After the first few days of free agency, these questions are no closer to being answered. Options are dwindling and a potentially explosive off-field situation surrounding trade target Deshaun Watson of the Houston Texans doesn’t help matters.

Meanwhile, the 49ers brought in former Super Bowl winner Joe Flacco for a visit this week. There’s a chance he’ll be signed on the cheap to be Garoppolo’s back. That comes after San Francisco missed out on free-agent targets such as Mitchell Trubisky and Andy Dalton.

Moving forward, it really does seem like San Francisco’s options to be the Week 1 starter next season are down to Garoppolo or a potential unnamed first-round pick in the 2021 NFL Draft.

By now, it’s well known that multiple women have come forward to accuse the reigning NFL passing champion of sexual assault. Local Houston attorney Tony Buzbee has already filed multiple suits on behalf of his clients and indicates he has nine women ready to come forward.

As for the NFL, it sent a letter to Mr. Buzbee indicating that the league is opening up an investigation on the matter under the guise of the personal conduct policy.

None of this means the 25-year-old Watson is guilty of a crime. Criminal complaints have yet to be filed against him. There’s no telling whether a criminal investigation in Texas is even on the horizon.

The NFL’s decision to investigate this matter does change the dynamics a bit. Led by commissioner Roger Goodell and Co., the league has in the past dropped the ball when it comes to similar off-field situations. They had to investigate once the allegations became public record.

Without getting into the details or opining on the substance of the allegations, one thing has become clear. It’s going to be hard for any team to trade for Deshaun Watson with things still outstanding relating to the NFL investigation and a lack of further clarity on the accusations.

Simply put, Watson is now less likely to be dealt than he was a week ago. Despite the quarterback wanting to play in San Francisco and the 49ers’ obvious interest, he will not be wearing the red and gold any time soon.

General manager John Lynch and Co. can tell us whatever they want publicly. They believe Jimmy Garoppolo will be the Week 1 starter if healthy. Reports also seemed to suggest that the 49ers would only move off Garoppolo if they acquired Watson. Now that this is unlikely to happen over the short term, the quarterback’s job is safe. Right?

Well, not so fast. It’s obvious San Francisco did not view Carson Wentz as an upgrade over Garoppolo before he was dealt from the Philadelphia Eagles to the Indianapolis Colts. Hence, the team’s lack of interest.

The same thing can’t be said about former Detroit Lions signal caller Matthew Stafford before he was moved to the division-rival Los Angeles Rams. San Francisco was in on Stafford. It made a trade offer.

Unfortunately, nothing came to fruition on that end after Los Angeles offered up a starter-caliber quarterback in Jared Goff and two first-round picks to land Stafford. It’s an offer the 49ers simply could not match.

Fast forward a few weeks, and the 49ers are in a less-than-stellar situation at quarterback. They have Garoppolo returning after he’s pretty much missed half of San Francisco’s games to injury over the past three seasons. The 29-year-old quarterback is also set to count $26.4 million against the cop in 2021 — putting the 49ers in an unenviable financial situation.

As options continue to dwindle, the 49ers have showed their hand. By displaying strong interest in Stafford while ignoring Wentz’s availability, it’s clear the only thing that will end the Garoppolo era in San Francisco will be some type of blockbuster deal.

No, that does not include acquiring Sam Darnold in a trade with the New York Jets. The former No. 3 pick would be brought in to compete with Garoppolo, not replace the 49ers’ incumbent starter.

John Lynch and Co. are seemingly against the idea of a quarterback competition involving Garoppolo during training camp. That’s why the 49ers are interested in Flacco while having failed to make strong plays for the above-mentioned Trubisky and Dalton.

Both of those two players would have likely been in somewhat of a competition with Garoppolo. Obviously, Flacco would simply be brought in to be a veteran backup option. For whatever reason, San Francisco’s brass believes that a Garoppolo-led quarterback competition would have an adverse effect.

2021 NFL Draft Becomes An Option For The San Francisco 49ers

A team that still believes its Super Bowl window is wide open, San Francisco made win-now moves during the first days of NFL free agency.

That included re-signing left tackle Trent Williams to the largest contract in league history for an offensive lineman. It also included signing Pro Bowl center Alex Mack to a three-year contract while structuring other deals to include minimal hits against the 2021 NFL salary cap.

All of these moves were under the guise of contending in 2021. In fact, Williams and Mack are going to cost less than $12 million combined against the cap.

So, why would the team turn around and either trade up for a quarterback in the 2021 NFL Draft or select one No. 12 overall? It seems counterintuitive when we don’t focus on it through a purely financial lens.

I mentioned above that Garoppolo boasts a $26.4 million cap hit in 2021. San Francisco can get out of it via trade or release while saving $23.6 million against said cap.

A rookie quarterback would then slide in as the likely Week 1 starter, coming a lot cheaper in the process.

This would enable the 49ers to make win-now moves as a second tier of free agents hit the open market following the 2021 NFL Draft. By re-signing Williams and acquiring Mack to shore up its offensive line, San Francisco might in fact be leaning in this direction.

It’s also important to note that any signing of Joe Flacco would pretty much create a full quarterback room in San Francisco with Garoppolo and Josh Rosen as holdovers.

Heck, there’s a chance (however minimal as it might be) that Flacco would then take over as the hypothetical bridge quarterback in 2021 with an unnamed first-round pick learning behind him. Who reading this has confidence that he can be that stopgap guy while leading San Francisco to Super Bowl contention? I didn’t think so.

Even then, there’s a number of intriguing scenarios for San Francisco at the quarterback position heading into next month’s NFL Draft.

Pulling off a blockbuster trade with the New York Jets at No. 2 overall for BYU’s Zach Wilson would be the ideal scenario. That hypothetical trade would include New York’s brass coming to the unlikely conclusion that Sam Darnold is the man for the job.

Outside of Wilson, San Francisco could potentially trade up to the bottom half of the top 10 for someone like Ohio State’s Justin Fields or Trey Lance of North Dakota State. Both are talented. But are also seen as projects. There’s very little reason to believe they can be Day 1 starters. The same can be said for reigning Heisman finalist Mac Jones of Alabama, who could potentially be had with the 12th pick.

What does this all mean? It’s the roundabout way of saying either Jimmy Garoppolo or Zach Wilson will be the 49ers’ starting quarterback when Week 1 of the 2021 NFL season comes calling.

Unless, of course, the Deshaun Watson situation takes a dramatic turn ahead of the 2021 NFL Draft in about six weeks.

Fri Mar 19 , 2021
The European Union faces a tough task in seeking to introduce so-called Covid-19 passports by June to get people traveling again, according to the owner of France’s busiest airport. The slow progress and uncoordinated roll-out of health passes already under development at airlines and other companies suggest the bloc’s target […] 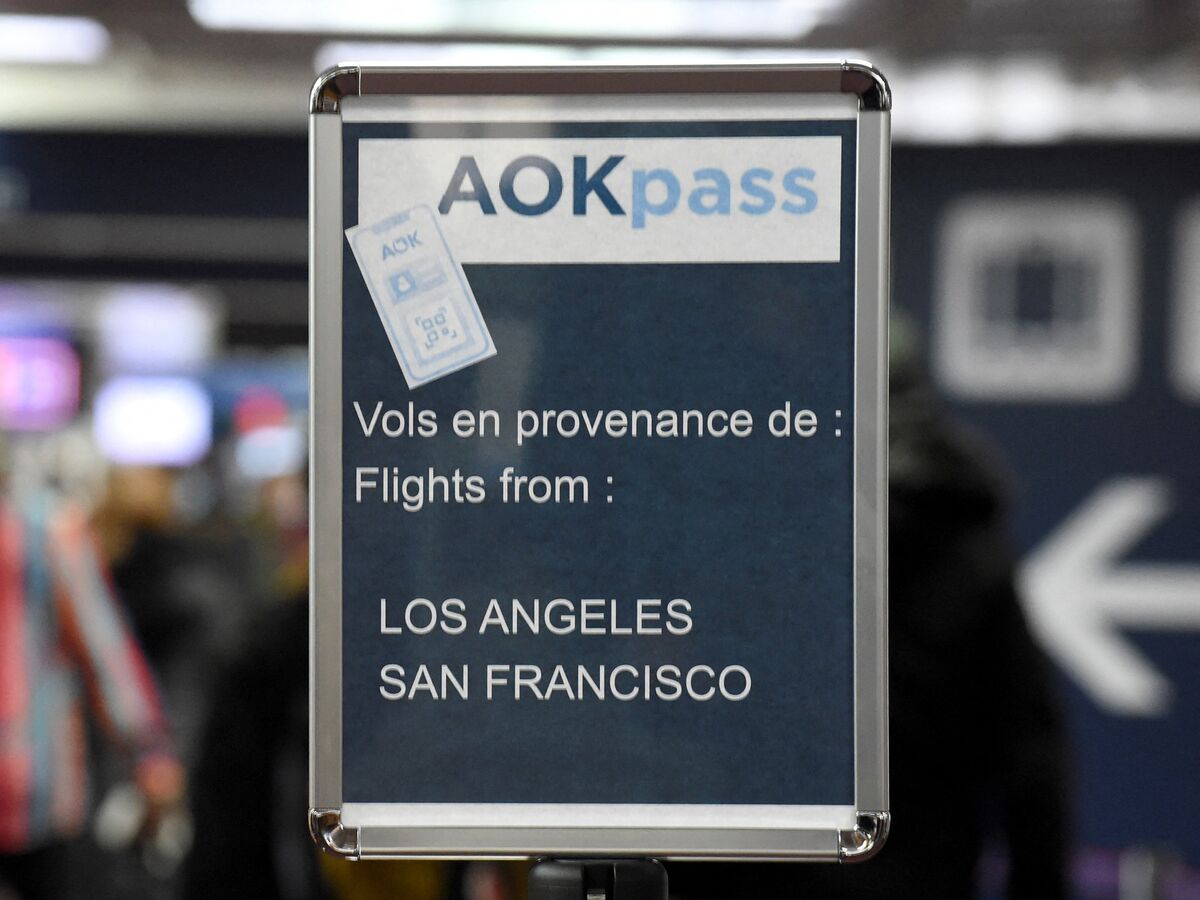