Pierre-Edouard Bellemare‘s path to the NHL was one unlike most, as the Le Blanc-Mensil, France, native grew up in a place where the game of hockey was almost non-existent. “It didn’t look like anything. There was no hockey,” Bellemare said about the game’s presence in France when he was young. […]

Pierre-Edouard Bellemare‘s path to the NHL was one unlike most, as the Le Blanc-Mensil, France, native grew up in a place where the game of hockey was almost non-existent.

“It didn’t look like anything. There was no hockey,” Bellemare said about the game’s presence in France when he was young. “To be honest, when I started hockey you could see hockey every four years for a half a game during the Olympics. So my dream was always to go to the Olympics, never to the NHL because I had no knowledge of the NHL until I probably turned pro [when I was] 17 or 18.”

For Bellemare, his love for the game came shortly after his first time hitting the ice, as he and his older brother tagged along with their sister to her first practice.

The rest was history.

“I started hockey because of my big sister,” Bellemare recalled of his introduction to the sport. “When she started hockey my brother and I were like, ‘well we also want to go skate’ and after that hour of free skating we fell in love with it and I never quit since then.”

As Bellemare became entranced by the game of hockey alongside his family, his siblings pushed him to grow as a player and helped him find a deep passion and appreciation for the game, especially his brother. This connection with his family and the sport led Bellemare down a life of hockey.

“My idol growing up, obviously because of the fact that you were never able to see hockey that much, was my big brother,” Bellemare said. “Everything he did, I was trying to do the same thing as him and I think that’s a big part of why I became better, faster, because I was playing every day in the streets against my big brother. As soon as he did a move, I was trying to do the same thing. Eventually I ended up playing with grown-ups because it was his friends. I think that helped me be better than the kids at my age. After many, many, many years of hard work I got to the NHL, so if I can make it, trust me, everybody can make it.”

From starting in a situation where the sport was unfamiliar to most, the now 36-year-old navigated his way through multiple European leagues–playing in both France and Sweden–before making it to the world’s top stage in 2014-15, when he made his National Hockey League debut with the Philadelphia Flyers.

After accomplishing the once unknown dream of playing in the NHL, Bellemare has been a mainstay in the league ever since and skated in his 500th career game on Saturday, becoming the second French player and the third French-born player to reach the milestone. He joined Antoine Roussel (544) and Paul MacLean (719), who was born in France but is Canadian.

“Pretty surreal, to be honest,” Bellemare said of playing in his 500th game. “In the morning, [I found out and] I kind of didn’t realize it. Definitely when I came home, I had time to kind of think about all of the different memories and what it took to come into the NHL whatsoever. The people and the things that I’ve heard and what it means to our country, it was pretty unbelievable. Obviously I’m proud of it, but it’s something for our country that is huge for our youngsters.”

The journey to this landmark of 500 games in the NHL was an arduous one at times for Bellemare, and those experiences along the way were some that made him an invaluable asset to any team he has been on. One moment in particular came when Bellemare turned pro and went from France to the Allsvenskan league, the second-highest professional league in the Swedish ice hockey system.

“It was tough, it wasn’t easy,” Bellemare said of the move. “I came to a country that was really nice, but hockey-wise France was not really known internationally. I remember telling my mom after a few weeks I think I would be back home because it was a tryout contract… It wasn’t the easiest time, but those times are the times that make you stronger. I had to learn a different way to be, to be able to stay in that country and eventually this is the way I am now. Make sure I make guys understand that what we are living every day is amazing and coming in every day with a smile on your face shouldn’t be that tough when you do the best thing that you can do.

“That time in Sweden, that is what it taught me. I realized that a lot of kids had hockey given to them and they didn’t really have to work, it was a part of the culture. When I came there my mom told me to just make sure you make everybody understand that you will work for that and you are so happy to be there every day. Eventually I signed a contract, not because I was the best hockey player, it was because they literally told made ‘your attitude is contagious, you’re so positive that we want to see if you can keep doing that for another year.’ My first contract in Sweden wasn’t really signed because I was good at hockey, it was more because of who I was in the locker room and since then it’s been following me every time. That tough time in Sweden definitely helped me to become who I am now, and I think the reason why I am with this team and the reason why I am still in the NHL and I’ve accomplished 500 games. I am not the best hockey player, but if you put the jersey on me I am going to try to work as hard as I can and be as positive as I can about it.”

Bellemare’s journey has been a story of overcoming barriers, sticking with the process and of course, always having a smile on his face. In his NHL career, the now seven-year NHL veteran has totaled 45 goals and 50 assists in 501 contests, appeared in the 2018 Stanley Cup Final with the Vegas Golden Knights and established lifelong connections with those around him.

This season, Bellemare has skated in 47 games with the Avalanche, registering seven goals and one assist and leads the Avs forwards in short-handed ice time at 104:20. His penalty-killing abilities and his role as a two-way forward are some of his top qualities, but the impact he makes through his leadership, personality and effort is one that isn’t found everywhere and is what has been with him every step of the way.

“True professional,” said Avalanche head coach Jared Bednar of Bellemare. “Extremely unselfish guy, everything is team first, when you talk to him you get that impression from him right away, it’s just the type of leader and guy he is. [He’s] real good with the young guys, his linemates, making them feel comfortable, a great communicator. It doesn’t surprise me that he hit 500 because even coming to the league as late as he did, he just takes care of himself off the ice. Does all the right things with his training, his recovery work, diet, all of it. Working on days off, he’s always out on the ice, helping with goalies. It’s just the type of guy he is, so congrats to him.”

His focus on hard work, having a positive attitude and a love for the game is what has rubbed off on everyone Bellemare has played with. It is what makes Bellemare a joy to be around and one of the reasons he hit 500 games in the NHL.

“He means a lot,” said Avalanche forward Andre Burakovsky. “He’s definitely one of the best teammates, he’s always positive. He’s always coming in with a smile, he’s always bringing a lot of energy to the locker room. For me coming to a new team [when joining the Avs] and he was new too, we kind of bonded a little bit because he was talking perfect Swedish and I had conversations with him. I think it’s really good and really fun to have him on the team, and he’s working his back off every day for the team and sacrificing himself for the team every day.”

Tue May 4 , 2021
There are endless reasons to plan a visit to Mexico. Delicious cuisine, friendly people and beautiful scenery are just a few of the many attractions that draw in visitors throughout the country. One of the top draws, though, is the destination’s stunning beaches. From long, white-sand coasts on the Caribbean […] 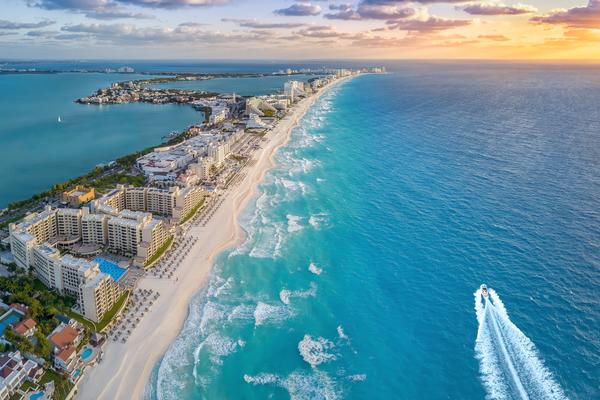