Outside the window the frigid tundra stretched away to meet the horizon; vast, treeless and unnerving. I was the sole passenger on North America’s most northerly bus service, the Dalton Highway Express, as it bumped its way along Alaska’s notorious haul road towards the ominously named settlement of Deadhorse near […]

Outside the window the frigid tundra stretched away to meet the horizon; vast, treeless and unnerving. I was the sole passenger on North America’s most northerly bus service, the Dalton Highway Express, as it bumped its way along Alaska’s notorious haul road towards the ominously named settlement of Deadhorse near the Arctic Ocean. The only other traveller, a laconic Canadian, had disembarked several hours previously at a desolate truck stop called Coldfoot. Since then, the driver and I had been motoring north past the road’s last campground, its last outhouse and its last tree (a forlorn looking spruce with a “do not cut” sign). It was as if I was experiencing an extreme form of social distancing before Covid-19 made it de rigueur.

Extending 414 miles from Livengood just north of Fairbanks to the rugged Prudhoe Bay oilfield in Deadhorse, the Dalton Highway is America’s most northerly interconnecting road. It’s also, arguably, its most dangerous. Huge 18-wheel trucks hog the centre of the unpaved thoroughfare; arctic storms can reduce visibility to practically zero; and the weather can be deathly cold. In 1971, Cat Prospect Camp just south of Coldfoot recorded the US’ lowest-ever temperature, a bone-chilling -80F (-62C).

The Dalton Highway was built in 1974 to serve the Prudhoe Bay oil patch, Alaska’s economic lifeblood and supplier of nearly 85% of the state’s budget. In its early days, it was purely a haul road for trucks. Then, in 1994, the state opened the highway to private vehicles. With 100,000lb juggernauts thundering full throttle over loose gravel, don’t expect an easy ride.

“Driving the Dalton Highway can be extreme in summer or winter,” said John Rapphahn, park ranger and manager of the Arctic Interagency Visitor Center in Coldfoot. “In summer, trucks throw up dust and muddy roads can make surfaces slippery. Winter brings icy conditions and avalanches. With only about one quarter of the road paved, motorists should be prepared for a flat tyre or two.”

You may also be interested in:
• The US island that feels like Russia
• Seven of the world’s riskiest roads
• The town where money grows on trees

Breakdowns can be costly. “I once found a couple stuck in a ditch in the wintertime at -30F,” recounted Rapphahn. “I couldn’t get their vehicle out, so I gave them a ride to Yukon River Camp where they called for a tow truck. It cost them around $1,200.”

If you’re driving, he recommends equipping yourself with a radio. “It’s worth investing in a handheld CB tuned to Channel 19. In this way, approaching truckers and pilot cars can notify you of an oversize load when they see you on the road. You will also have the added benefit of being able to communicate with other vehicles if a problem occurs.”

Lacking a car or radio, I needed help to reach Deadhorse via terra firma and fulfil my ambition of crossing the Arctic Circle by land. Hitching a lift with a truck wasn’t an option as commercial trucks are prohibited from taking hitchhikers on the Dalton for liability reasons. Instead, I booked a ticket with America’s unlikeliest bus service.

The Dalton Highway Express was launched more than 20 years ago to meet a small but growing demand for ground transportation on the road.

“Our guests come from all over, although the majority are US travellers,” explained the company’s marketing coordinator, Kathy Hedges. “Some are looking for low-cost transportation to get to or from Deadhorse on a scenic route; others are trying to get to a good starting point to hike into the Gates of the Arctic National Park or take a canoe out at the Yukon River bridge. A growing number of travellers are biking one way and looking for a ride in the other direction.”

Between the beginning of June and the end of August, the company runs a twice-weekly return service between Fairbanks and Deadhorse covering a rugged 500 miles in just 16 hours.

Short on time but intrigued to experience what promised to be one of the world’s most surreal bus rides, I booked the Express one-way to Deadhorse with the intention of flying back. I chose 21 June as my departure date. With 24-hour daylight north of the Arctic Circle, I wanted to witness the ethereal midnight sun.

With little in the way of settlements along the road’s course, the Dalton Highway Express doesn’t operate a spontaneous request-stop service. You book in advance and arrange your itinerary. Some people like to camp overnight and reboard the bus on its return leg; others plan ambitious hiking excursions with survival gear across Alaska’s trail-less wilderness.

“We like to think we are a service people can rely on,” said Hedges, “If customers get dropped off on one day and make a reservation to be picked up, they can count on us being there for them.”

As a visitor from lower latitudes, I felt as if I was transiting a strange new universe

Reliability is essential. The Dalton is an intensely lonely road. There are no medical services, little mobile-phone coverage and only two pinprick settlements en route: Coldfoot (population: 10) and the subsistence hunting community of Wiseman (population: 14).

With the bus, I felt in safe hands. The company’s drivers are experienced and subject to professional in-house training. “Usually, people get into trouble on the highway either because their vehicle isn’t meant to go on gravel roads or they themselves are not prepared,” Hedges revealed. “They go too fast for the conditions or make poor turning and lane placement decisions.

Leaving Fairbanks promptly at 06:00, our durable Ford Econoline van motored past spindly spruce and paper birch trees to the start of the road proper at Livengood. With just myself and the Canadian on board, there was plenty of space. Eight hours later, after crossing the mighty Yukon River and the Arctic Circle, we grabbed a quick lunch at the Trucker’s Café in Coldfoot, the last refreshments for 240 miles and the disembarkation point for my fellow passenger.

Beyond Coldfoot, the Dalton climbed the remote Brooks Range before summiting the 4,739ft Atigun Pass and descending onto the eerie North Slope, one of the most isolated stretches of road on Earth. The scenery – vast intact ecosystems barely touched by humans – was unlike anything I’d ever seen. Cleaver-shaped mountains were slowly replaced by a barren tundra of shallow lakes, frost mounds and ice-wedge polygons sculpted by the extreme arctic weather. As a visitor from lower latitudes, I felt as if I was transiting a strange new universe. Even the bus driver seemed to be silently awe-struck as he skilfully negotiated the steep grades and sharp curves.

“What isn’t a highlight on the Dalton Highway?” Hedges agreed, acknowledging the road’s unique allure, even to hardened regulars. “Travelling it even once a week, our drivers notice the differences. It seems overnight to make changes. It is amazing what 24-hour daylight will do for the vegetation.”

In the south, aspen, birch and spruce trees are interspersed with cottongrass and sedge meadows. Further north, the flat monotony of the tundra is broken by willow shrubs, reindeer lichen, pink lousewort and blue anemone. The wildlife is legion and varied. Moose, lynx, beavers, wolves and grizzly bears inhabit the boreal and mountain regions, while on the bleak North Slope, musk oxen and caribou can be seen by the herd. Ironically, my most memorable “wildlife” encounter happened when we made an obligatory photo stop at the Arctic Circle and a swarm of mosquitos literally ate me for lunch.

The only constant on the road is the Trans-Alaska pipeline. Carried above ground in these high northern latitudes due to permafrost, the pipeline pumps out nearly 500,000 barrels of oil a day. As we approached Deadhorse, with 500 miles of empty tundra stretching out on either side of the road, it was one of the few visible features, aside from pingos (ice-cored hills) and musk oxen.

Even though I’d played no role in driving or navigation, reaching Deadhorse after 16 hours of loose stones and half-frozen mud felt like crossing the finish line at the Dakar Rally. I wanted to give the driver a trophy as well as a tip.

Huddled eight miles south of the Arctic Ocean, the drab, utilitarian Prudhoe Bay oil-camp resembled a dystopian movie set. With brutal winds whipping across the coastal plains, getting here was more about the journey than the destination.

I’d prebooked a room in the Prudhoe Bay Hotel, an industrial work-camp with 24/7 canteen food, a ban on booze and a sign on the door that read, “Everyone must take their boots off”. Full of ruddy-faced oil-workers counting the days to their next vacation (and drink), this was an integral part of the Dalton Highway experience.

After a celebratory sandwich, I stepped outside for a night-time walk. It was midnight and still light. Across a lake, half-hidden behind low clouds, the midnight sun did its best to emit a weak, paltry radiance. I had reached the top of the continent, the last stop on the line for the Dalton’s only means of scheduled land transport. For one day at least, I could enjoy the unique honour of being the most northerly bus passenger in the Americas.

If you liked this story, sign up for the weekly bbc.com features newsletter called “The Essential List”. A handpicked selection of stories from BBC Future, Culture, Worklife and Travel, delivered to your inbox every Friday.

Buying that first collector car can be quite a journey |

Tue May 11 , 2021
(Editor’s note: During the month of May, the ClassicCars.com Journal is publishing a series of stories about buying your first, or perhaps your next, collector vehicle. Today, reader Rob Staple shares the story of buying a first collector car, described as a 1965 Ford Mustang GT350 tribute. If you have […] 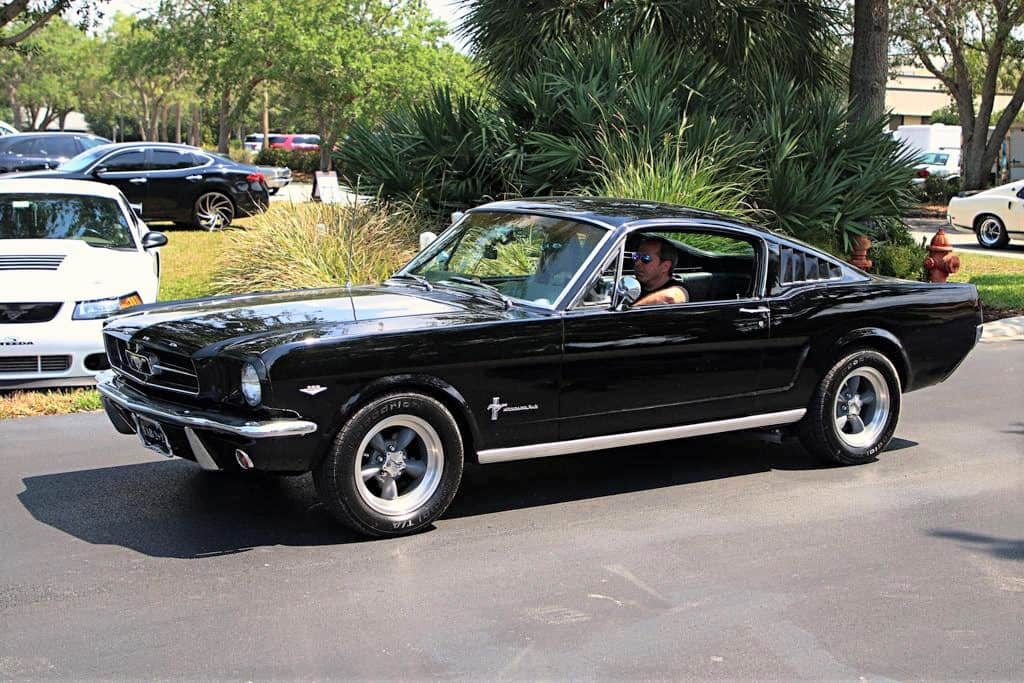