AUSTIN — The Senate on Tuesday unanimously passed a $250.7 billion, two-year budget that would keep last session’s promise to boost state funding of public schools and apply the brakes to rising local school property taxes. Beyond elementary and secondary public schools and priorities such as border security and mental […]

Beyond elementary and secondary public schools and priorities such as border security and mental health, though, the budget clamps down hard on other state programs — something likely to continue unless a coming wave of federal stimulus money persuades lawmakers to loosen the purse strings.

The senators’ budget, which would spend $117.9 billion of state general-purpose revenue, funds improvements made last time to state support for K-12 education, such as teacher pay raises and extra help for poor, bilingual and dyslexic students.

It also would provide $3.1 billion more to cover the costs of as many as 36,000 new students enrolling in public schools each year, add $1 billion to the $5.1 billion lawmakers spent on property tax cuts last session, and add an additional $453 million to maintain their push to better fund retired teachers’ pensions.

“This budget fully funds the historic commitment that we made last session to public education and our retired teachers,” said Flower Mound GOP Sen. Jane Nelson, the Senate’s chief budget writer and a former schoolteacher.

Finance Committee Vice Chairman Eddie Lucio Jr., another former teacher, said he feared last year’s economic slump caused by the COVID-19 pandemic would lead to a slashing of the budget for public schools — as happened after the 2008-2010 recession.

“My worst-case scenario would’ve been a repeat of 2011,” when lawmakers cut schools by $5.4 billion, he recalled.

“It was my dearest hope that we would not have to enact another cut so devastating 10 years later with the budget,” said Lucio, a Brownsville Democrat. “I am pleased that we did not do so.”

Even Republican senators, who made most of the decisions, acknowledged that after spending sizable sums on K-12 schools, $767 million on border security, $8.1 billion across a range of state programs for mental health, and $128 million to comply with a foster care lawsuit, the budget grew tight for social programs and higher education.

“Does it have everything that we want to see? Probably not,” said Sen. Lois Kolkhorst, R-Brenham, the Senate’s chief health and human services budget writer.

Also, the Senate budget would postpone decisions on how the state will spend the $17 billion it will receive from the American Rescue Plan Act that Congress passed last month.

It also is mum on how Texas should direct a cumulative total of nearly $18 billion of federal money flowing to public schools from the stimulus legislation recently signed by President Joe Biden, as well as a smaller COVID-19 relief package signed by former President Donald Trump in December.

While Texas GOP lawmakers took some of last year’s initial federal relief money and used it to free up state dollars they’d committed to public schools in 2019, Sen. Larry Taylor said that’s not allowed with the coming flow of federal assistance.

States can’t use the federal dollars to reduce their commitments to education, he noted. And in higher education, state support has flagged for several cycles, meaning it’d have to put more than $700 million a year of new state money into colleges and universities before it could qualify to take federal education money and use it for other things.

Taylor, a Friendswood Republican, said he’s concerned about “the COVID slide,” a slump in student learning caused by prolonged absences from classrooms during the pandemic.

“Our students in some cases are going to be more than one year behind,” he said. “We’ve got to get these kids caught up.”

Even before the pandemic, remedial instruction efforts for students who fail the third-grade reading test weren’t catching many of them up before fifth grade as hoped, said Taylor, who led a Finance Committee workgroup writing public schools’ budget.

Renewed efforts to fund programs such as tutoring should be a priority for using the federal dollars that are coming, he said.

Democratic Sens. Royce West of Dallas and José Menéndez of San Antonio urged legislative leaders to consider telling school districts to get tutoring programs ready for this summer and tap the American Rescue Plan money to pay for it.

Biden and Congress “allocated that money to Texas specifically to help public schools operate safely during the pandemic and recoup some of their extra millions in pandemic-driven expenses,” she said in a written statement. Molina said she hopes House-Senate negotiators next month will use the nearly $18 billion of federal money in the final version of the budget.

In the huge Medicaid health insurance program for the poor, aged and disabled, the Senate again proposed to cover only caseloads, not medical inflation. That means, as usual, lawmakers in 2023 will face a Medicaid IOU. However, more generous federal matching funds during the pandemic have all but erased the one they expected to pay this year.

On the federal foster care lawsuit, which has been dragging on for a decade, she said, “We are bound to do better in Texas, and we will do better.”

In sweltering prisons, a pay bump

In criminal justice, the Senate budget would bump pay by 3% for prison guards who work in maximum-security units. Though Houston GOP Sen. Joan Huffman said that will help “talented” correctional officers “to retain this very high-stress job,” the prison system had sought 10%.

Asked by Menéndez about prison units with no air conditioning, which he said may create “inhumane” working conditions, Huffman said, “We were on a tight budget. … We had to be selective [about construction projects funded.] The heat was a factor we considered.”

The budget also would spend $57.6 million to combat human trafficking, pay for a new recruit class at the Department of Public Safety and use $39 million to fortify the Texas Capitol with bomb-sniffing dogs, 74 new hires and gear such as video cameras and panic buttons, Huffman said.

In higher education, the Senate would provide TEXAS Grants, the state’s main financial aid program, to only about 56% of students from families with modest incomes who are eligible for an initial-year stipend, according to the Texas Higher Education Coordinating Board.

While there’s a reporting lag, this academic year the state was projected to serve 87,556 students. Using an average award of $5,000 per recipient, the Senate’s budget would fund about 87,000 in fiscal 2023.

Sen. Brandon Creighton, a Conroe Republican who steered the chamber’s higher education budget, said it honors “a mutual priority” to reverse an exodus of Texas medical school graduates to other states by creating more first-year residency slots. By adding $48 million to the effort, senators would create 1.1 residency slots for each baby doctor coming out of medical school in Texas, he said.

Once again the Senate budget would move ahead with a several-year push to upgrade and expand deteriorating state mental hospitals, though it would again omit Dallas area leaders’ wish for state money to help create a new one in Dallas. However, West and Kolkhorst hatched a provision that includes $15 million apiece for urban and rural improvements.

Though agencies requested, budget writers did not grant money for a new driver’s license office in Plano and a new Department of Motor Vehicles regional service center in Dallas. 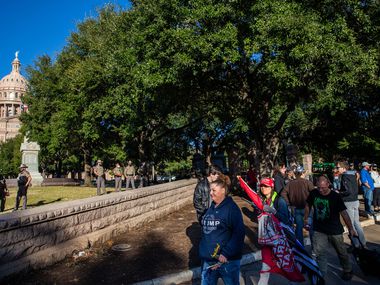