NEENAH, Wis. (WFRV) The thrill of witnessing live theater is like no other. The silence as the lights go down, the bright, colorful costumes floating across the stage, and the roaring applause is an indescribable feeling. St. Mary Catholic High School in Neenah knows that firsthand. This spring, Zephyrs High […]

NEENAH, Wis. (WFRV) The thrill of witnessing live theater is like no other. The silence as the lights go down, the bright, colorful costumes floating across the stage, and the roaring applause is an indescribable feeling. St. Mary Catholic High School in Neenah knows that firsthand.

This spring, Zephyrs High School Theater is performing the hit Broadway musical Anything Goes. The show follows an eclectic group of characters as they navigate “romantic complications” on the SS American.

“Anything Goes is a classic musical. It was written in the early 30s and it’s been revived many times throughout history. It’s a goofy, sort of farce comedy with a lot of crazy characters that all get on a boat together,” says Hayden Kraus, Fine Arts Director at St. Mary Catholic Schools.

“We have gangsters, a night club singer, a millionaire from Wall Street, a British fiance,” says Kraus.

“Moonface Martin is a gangster who is almost too goofy to be a gangster. Like he’s so goofy it doesn’t make sense. In one of the opening scenes of the show, he has a violin case, and inside of it is supposed to be a violin, but then it spills out and he’s like “oh, shoot” it’s actually a Tommy gun,” says Weis.

“It was very exciting to get to perform in front of a live audience. Musical theater was always my thing in high school. To be able to perform one last time altogether onstage especially as a senior, it was very meaningful to get the opportunity to do that,” says Meyer.

While many schools in the area are only doing virtual shows, St. Mary Catholic Schools are fortunate enough to be able to do both. The cast and crew did four live performances for family and staff. One of the live performances served as filming for the version that will stream online.

Fri Mar 12 , 2021
Two sessions will give admitted and prospective students an inside look at academic programs, financial aid, campus life and athletics from the people who know the university best. “Explore SDSU provides prospective and admitted students and families the perfect opportunity to witness first-hand our campus’s vibrant spirit and connected […] 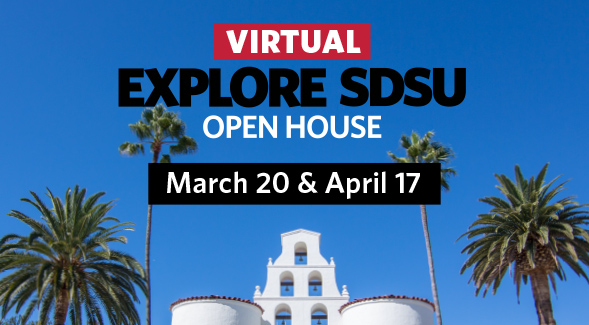