The findings add to evidence that the giant ice sheet is highly vulnerable to a warming climate, creating risk of rapid sea-level rise BUFFALO, N.Y. — In the 1960s, U.S. Army scientists drilled down through nearly a mile of ice in northwestern Greenland — and pulled up a tube of […]

The findings add to evidence that the giant ice sheet is highly vulnerable to a warming climate, creating risk of rapid sea-level rise

BUFFALO, N.Y. — In the 1960s, U.S. Army scientists drilled down through nearly a mile of ice in northwestern Greenland — and pulled up a tube of dirt from the bottom.

Chester “Chet” Langway, who joined the University at Buffalo geology faculty in the 1970s, was one of the leads of the drilling expedition at a site known as Camp Century. The samples his team collected there, including the frozen sediment, followed him to Western New York. The materials resided here for a number of years before making their way to Copenhagen, Denmark. Then, the dirt was largely forgotten.

But in 2019, University of Vermont scientist Andrew Christ, PhD, looked at the sediment through his microscope — and couldn’t believe what he was seeing: twigs and leaves instead of just sand and rock. That suggested that the area had been free of ice in the recent geologic past — and that a vegetated landscape stood where a mile-deep ice sheet as big as Alaska stands today.

Over the last year, Christ and an international team of scientists — including Elizabeth Thomas, PhD, assistant professor of geology in the UB College of Arts and Sciences — have studied these one-of-a-kind fossil plants and sediment from the bottom of Greenland. In addition to Christ, the research was led by Paul Bierman, PhD, at the University of Vermont; Joerg Schaefer, PhD, at Columbia University; and Dorthe Dahl-Jensen, PhD, at the University of Copenhagen.

“Our study examines in detail the sediments from beneath the Camp Century drill site on the northwestern part of the Greenland Ice Sheet. Our results suggest that at some point in the past 1 million years, the Camp Century site was ice-free,” says Thomas, who conducted chemical analysis that enabled the team to understand the types of plants that were on-site.

“Ice sheets typically pulverize and destroy everything in their path,” says Christ, “but what we discovered was delicate plant structures — perfectly preserved. They’re fossils, but they look like they died yesterday. It’s a time capsule of what used to live on Greenland.”

The research was published March 15 in the Proceedings of the National Academy of Sciences (PNAS).

The discovery helps confirm a new and troubling understanding that the Greenland Ice Sheet has melted nearly completely during recent warm periods in Earth’s history. For example, in 2016, a study in Nature led by Schaefer and co-authored by UB geology professor Jason Briner estimated that a sample of bedrock from below the Greenland Ice Sheet was exposed to open sky for at least 280,000 of the last 1.4 million years.

Understanding the Greenland Ice Sheet in the past is critical for predicting how it will respond to climate warming in the future and how quickly it will melt.

The material for the new PNAS study came from Camp Century, a Cold War military base dug inside the ice sheet far above the Arctic Circle in the 1960s. The camp was the site of a secret effort, called Project Iceworm, to hide nuclear missiles under the ice. As cover, the Army presented the camp as a polar science station.

The military mission failed, but the science team did complete important research, including drilling a 4,560-foot-deep ice core.

The new study makes clear that the deep ice at Camp Century entirely melted at least once within the last million years and the landscape was instead covered with vegetation, including moss and perhaps shrubs.

The team of scientists used a series of advanced analytical techniques to probe the sediment, fossils, and the waxy coating of leaves found at the bottom of the Camp Century ice core.

The new study shows that not all ecosystems of the past were scoured into oblivion by ages of glaciers and ice sheets bulldozing overtop. Instead, the story of these living landscapes remains captured under the relatively young ice that formed on top of the ground, frozen in place, and holds them still.

Thu Mar 18 , 2021
WASHINGTON (Reuters) – U.S. land borders with Canada and Mexico will remain closed to non-essential travel until at least April 21, the U.S. government said on Thursday. FILE PHOTO: A Canadian Border Service Agency officer walks between checkpoints at the Canada-United States border crossing at the Thousand Islands Bridge, which […] 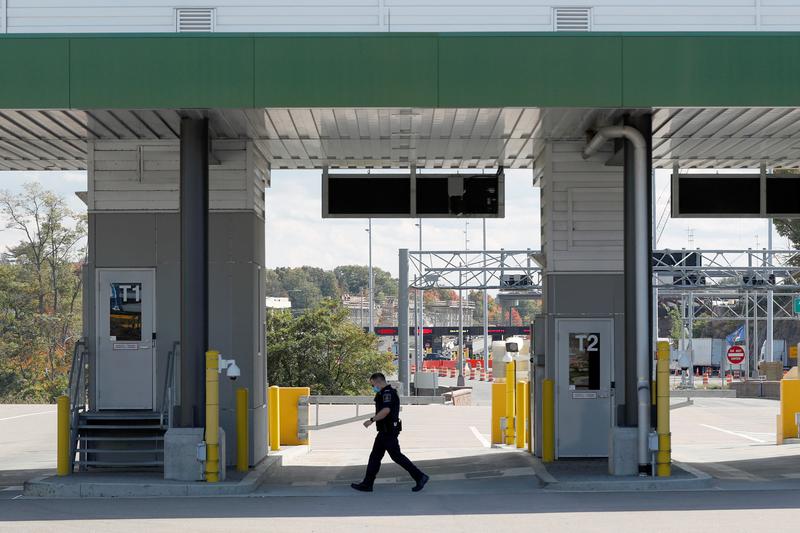