How a New Generation of Black Travelers Is Breaking Boundaries The Black travel movement has come a long way since the days of the Green Book. Now online communities and influencers are inspiring a new generation of global explorers. Few people would relish being told where they can and can’t […]

How a New Generation of Black Travelers Is Breaking Boundaries

The Black travel movement has come a long way since the days of the Green Book. Now online communities and influencers are inspiring a new generation of global explorers.

Few people would relish being told where they can and can’t go. But that was the reality for African Americans living in the Jim Crow era.

From 1936 to 1966, The Negro Motorist Green Book and subsequent titles helped keep Black travelers and their families safe, with warnings about “sundown towns,” where people of color could face intimidation and violence after dark, and recommendations on the hotels, restaurants, and businesses that would welcome them.

Thankfully, the original Green Book is no longer a necessity for the African American community. Black travelers have become an economic force, spending $109 billion on vacations in 2019, according to a recent study by MMGY Global, a marketing agency. Yet we still have concerns. In response, a powerful new Black travel movement has emerged over the past decade — one centered on giving travelers of color the advice, inspiration, and sense of community we need to explore the world.

One formative moment was the 2011 creation of the Nomadness Travel Tribe, an invitation-only Facebook group, by New Jersey–based Evita Robinson. “The Nomadness brand has always been synonymous with community, risk taking, trailblazing, and trying new things first,” Robinson says of the collective that started with just 100 members and is now more than 25,000 strong. Users swap tips and compile guides to destinations, with notes on accommodations, local experts, safety risks, and Black-owned businesses to support. One woman recently asked for tips on St. Lucia and, in particular, a recommendation for a trustworthy taxi service; another, just back from the island, replied with the phone number of the driver she’d used.

As Nomadness has grown, prominent Black travelers have also begun encouraging others to see the world. My own travel journey started around 11 years ago, when I set out to become a TV host — a realm traditionally dominated by older white men. I knew I’d have to go above and beyond to be considered by any network, so I became a pilot, a scuba diver, and adventurer and picked up more than 100,000 social media followers. In 2016, I became the first Black woman to host a show on the Travel Channel, Mysterious Islands. And last year, I hosted the first 24 episodes of Let’s Go Together, the Travel + Leisure podcast that celebrates diversity and inclusion in travel.

Others are charting new courses — and, in turn, inspiring more Black travelers. Toronto-based eco-explorer Mario Rigby walked from Cape Town to Cairo between 2015 and 2018, sharing his adventures on his blog. “I’ve always found it imperative to see diverse faces in the world of exploration,” Rigby, a Let’s Go Together guest, tells me.

The momentum continues to grow, and Rigby, Robinson, and I are far from alone. Detroit’s Jessica Nabongo reached her goal of visiting every country in the world in 2019, making her the first Black woman to document accomplishing that feat, taking nearly 200,000 social media followers along for the ride. Chicago native Nathan Fluellen has been surfing around the world since 2017, giving back to communities he has visited and sharing his discoveries on Instagram. The Bay Area’s Martinique Lewis has written the new ABC Travel Green Book, a modern-day version of the original that offers a global guide to Black-owned businesses. And countless other influencers, like fashion-minded Cedric Wood, are motivating Black people to travel, too. It’s proof that, when it comes to where we can go, the answer is pretty much anywhere.

An emerging field of experts is crafting experiences geared toward Black adventurers.

In 2012, attorney Sheila Ruffin noticed a gap in the travel market. After relocating to St. Thomas, in the U.S. Virgin Islands, to work on maritime and environmental issues, the Howard University School of Law grad realized that the yacht-charter business was geared almost exclusively toward one demographic — white.

“I thought to myself, Wow, I should change that,” Ruffin recalls. The Virginia native was already an avid traveler, so she decided to start her own company aimed at Black adventurers. In 2019, Soca Caribbean Yacht Charters was born, making Ruffin one of a growing number of Black advisors who curate luxury experiences for a group that has often been overlooked by traditional tourism outfitters.

“Black travelers, as a whole, have very diverse interests, just like everyone else,” notes Kareem George, founder of the Michigan-based agency Culture Traveler. A member of T+L’s Travel Advisory Board, George says his clients have all sorts of requests, though destinations like the Caribbean, Egypt, Kenya, South Africa, and South America tend to be among the most popular. “That’s because they’re iconic places — but also because of historical connections that clients might feel based on their own ancestry.”

The Caribbean is also key for Carl Napoleon, the founder of Carnival Jumpers. His Brooklyn, New York, company’s mission is to increase access to the Carnival experience by facilitating trips to these quintessential island celebrations. Carnival Jumpers handles basics like lodging, as well as more complex arrangements such as costume selections and introductions to mas bands or krewes, vastly simplifying the planning process.

Some advisors strive to build community among their guests. Christina Rice, a certified yoga and meditation instructor in Georgia, places wellness at the center of her OMNoire retreats for women of color. “I always say that a retreat is an extension of the retreat leader, so it’s important for attendees to truly know that person,” Rice says. Pre-trip video calls are an integral part of her process, familiarizing guests with the workshops, small-group conversations, guided meditations, and yoga classes that fill her itineraries, like those planned for Ghana and Portugal in 2021.

Cole Banks, Atlanta-based founder of Sisters Traveling Solo, also focuses on creating connections. She’s taken groups of solo women on a hiking expedition in Greece, a museum-centric jaunt through Morocco, and a beach retreat in the Seychelles. And while the destinations are part of the draw, so too are the potential friendships — like the ones forged between a trio of STS travelers who met in China in 2017 and now plan yearly getaways, most recently to Cartagena, Colombia.

“These women go from being strangers to lifelong friends,” Banks says of the people she brings together. “I see it happen on every single trip.”.

Mon Feb 1 , 2021
Artist’s concept of Kraken Mare, the largest methane lake or sea on Saturn’s large moon Titan. This moon is the only known body in space, besides Earth, known to have stable bodies of liquid (albeit not water) on its surface. Image via Cornell University/ NASA. Earth is a water planet. […] 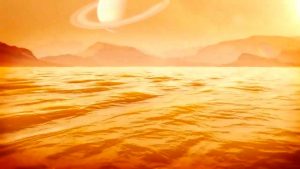