It was “a year of going through hell” for United Airlines. Delta Air Lines had “the toughest year” in its history. And for American Airlines it was “the most challenging year.” That’s how the executives who run those companies described 2020 in recent weeks. The airline industry is eager to […]

It was “a year of going through hell” for United Airlines. Delta Air Lines had “the toughest year” in its history. And for American Airlines it was “the most challenging year.” That’s how the executives who run those companies described 2020 in recent weeks.

The airline industry is eager to move on, but it hasn’t figured out how.

Air travel has recovered somewhat in recent months, but it remains deeply depressed compared with 2019, and no one knows when business will return to more normal levels. Two essential moneymakers for airlines — corporate and international travel — are likely to stay sidelined for another year and possibly much longer.

Now and for the next several months at least, airlines are flying whoever they can wherever they can. That often means catering to a small group of hardy leisure travelers who are undeterred by the pandemic to travel to ski slopes or beaches.

“As a quick strategy, fly where people are,” said Ben Baldanza, a former chief executive of Spirit Airlines, the low-cost carrier. “That’s been a real smart strategy, but that’s not a long-term way for those airlines to make money.”

But leisure travel offers limited comfort to an industry so thoroughly clobbered. Tourists and people visiting family and friends typically take up most of the seats on planes, but airlines rely disproportionately on revenue from corporate travelers in the front of the cabin. Before the pandemic, business travel accounted for about 30 percent of trips but 40 to 50 percent of passenger revenue, according to Airlines for America, an industry association. And those customers aren’t expected to return in great numbers any time soon.

The four largest U.S. airlines — American, Delta, United and Southwest Airlines — lost more than $31 billion last year, and the industry over all is still shedding more than $150 million each day, according to an estimate from Airlines for America.

The losses are even more stark when you consider that airlines have received $40 billion in federal grants to help pay employees and tens of billions more in low-cost government loans. The problem is airlines these days can’t fly planes with enough people at high enough fares to break even.

The industry spent much of the past year scrimping and saving, trimming older, less efficient planes from their fleets; renegotiating contracts; and encouraging tens of thousands of workers to take buyouts or early retirement packages.

But it hasn’t been enough to offset a drop of nearly two-thirds in air travel as public health experts and the Centers for Disease Control and Prevention continue to discourage travel. Airlines for America does not expect passenger numbers to recover to 2019 levels until at least 2023. And airlines might have to wait even longer if the economic recovery falters because of the spread of coronavirus variants or a delay in vaccinations.

Still, airlines say they are hopeful for the year ahead.

Southwest said sales this month were better than expected. Alaska Airlines said it hoped to operate about 80 percent as many flights this summer as it did in 2019, while Hawaiian Airlines offered a similarly upbeat forecast. Delta’s chief executive, Ed Bastian, said in a message to customers last week that he expected to see an “inflection point in the spring” as consumer confidence grew, travel restrictions eased and vaccine distribution expanded. Last week, JetBlue started daily flights from New York, Boston and Los Angeles to Miami and added seasonal flights to Key West, its first time serving either city.

“The discussion is shifting from who’s a survivor to who takes more share in the recovery,” said Sheila Kahyaoglu, an aerospace and defense analyst with Jefferies, an investment bank. “It’ll be about who can best access certain markets.”

The airlines have some things going for them. Lawmakers in Washington seem willing to provide the industry with a third large aid package since the pandemic took hold last spring. A House committee last week backed $14 billion in grants that airlines could use to pay workers through September, adding it to the coronavirus relief package under consideration in Congress.

Airlines are also doing what they can to stoke demand.

Delta recently extended its ban on booking passengers in middle seats through April and hired a chief health officer. The moves are part of Delta’s effort to brand itself as a premium, health-conscious carrier. Southwest is offering deals, including a sale promising one-way fares as low as $50 in celebration of its 50th anniversary. The airline typically has big sales in the fall and sometimes has them in the summer.

“I don’t think any of us could recall doing a wild sale in January, but that’s where we are,” Southwest’s chief executive, Gary Kelly, told investors and reporters last month. “The goal is simple: We need to stimulate travel. We need to get more bookings in place.”

Most industry experts say they expect travelers to return in greater numbers this spring or summer, as the weather improves and more people are vaccinated.

But planning for that isn’t easy. Passengers used to book flights months in advance, but now plans are often confirmed just weeks out. And trends in bookings have often been fleeting.

“Every time demand has shown signs of life, it’s taken another step backward,” said Hunter Keay, senior airline analyst at Wolfe Research. “So it’s very hard for airlines to go out there and put aircraft in markets, because if you get that wrong you just exacerbate the problem of cash burn.”

Perhaps the most difficult question for airlines and other travel businesses is when executives, middle managers and other business travelers will feel comfortable flying. In the final three months of 2020, corporate travel was down 85 percent or more at American, Delta and Southwest, according to the airlines.

The American Hotel and Lodging Association, a trade group, has said it does not expect business travel to fully recover until 2024. Other groups think it could take longer. By comparison, international business trips declined just 13 percent during the financial crisis a decade ago, but took five years to return to their previous high point, according to McKinsey.

Some experts argue that corporate travel may never fully recover, with many in-person meetings permanently replaced by video conferences and phone calls. Travel for sales meetings, conventions and trade shows is least likely to be permanently affected, IdeaWorks, an industry consulting firm, said in a December report. But shorter trips to meet with co-workers for a few hours — from New York to Washington, say — could be hit harder, it concluded.

Airlines are more hopeful, perhaps because they rely heavily on corporate travel.

About 40 percent of Delta’s big corporate customers expect their own business travel to be fully recovered by 2022, and an additional 11 percent by 2023, Mr. Bastian said on a conference call in January, citing the airline’s internal research. Only 7 percent said business travel might never be fully restored, while the rest said they were unsure when things would return to normal.

American is “very optimistic” that corporate travel will return as vaccines are distributed, Vasu Raja, the airline’s chief revenue officer, told investors and reporters last month. But, he added, “the rate of that is unclear at best.”

Sat Feb 20 , 2021
Enrollment in Minnesota’s public schools dropped by 2% for this school year, as many parents chose private school, home schooling, or postponed their students’ first year because of pandemic-related concerns. The decline, which was most pronounced among younger students, has major budget implications for districts already struggling with the added […] 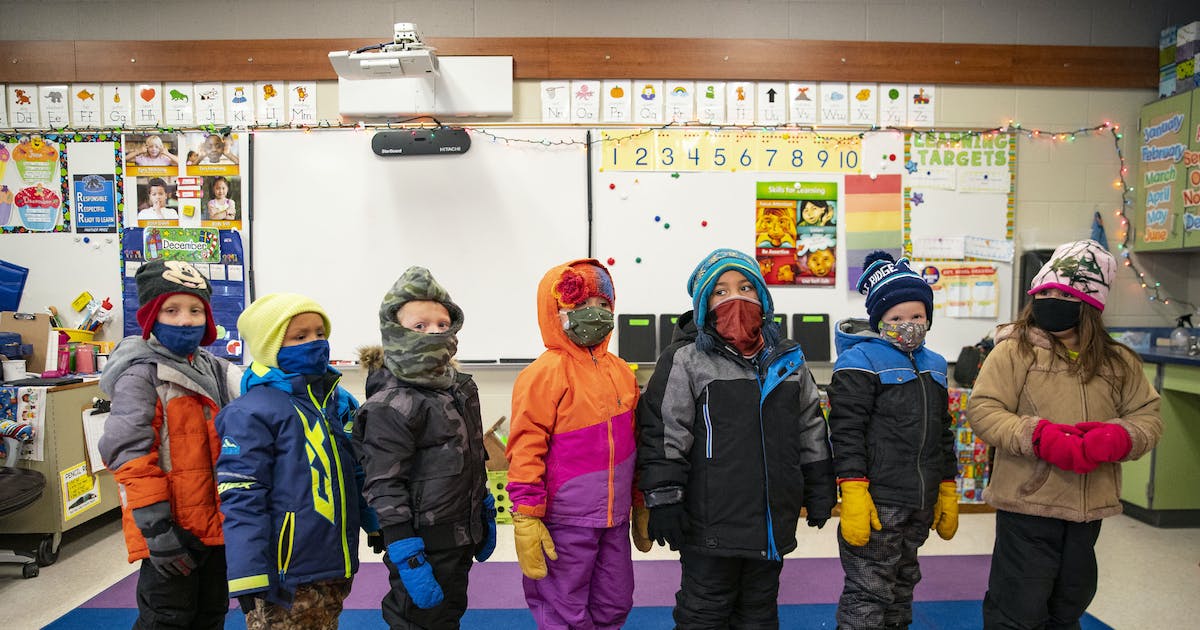